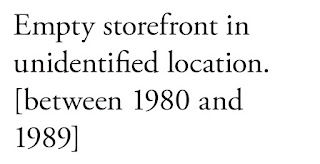 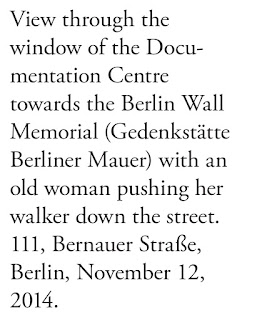 To reiterate, my interest in focusing on the descriptions for archival photographic material stems from the fact that this language plays a critical role in the photographs visibility and use in an archive, not to mention its status as a factual document. As a result, I want the final presentation of this project to produce a tension between the written description and the actual image. To create this tension, I will divorce the written description from the photograph, so that it forces viewers of my archive to imagine the associated photograph. In this regard, I am simulating the experience of searching for photographs in an archival institute, where you are required to make initial judgements on a particular image based upon the supplied description.

Provided here are a few of examples of "archival" description that will be included in the final project.

Part of the requirement for this assignment is to add twenty images to the thirty that were provided. Initially, I thought I would do this by looking in my collection or searching Google, selecting images and writing descriptions. However, when I was exploring the institutional archives online I realized it would be much more interesting to select existing archival photographs and their associated description. In this sense, the final fifty images would be composed of both real archival images and their accompanying descriptions and the provided images with my constructed descriptions.

In coming up with description for the thirty photographs provided, I found it necessary to try to determine the geographic location and date for each image. Fortunately, digital images carry their original date stamp. However this is set by the cameras internal clock, so if that happens to be wrong, your date will be wrong. If the image happened to be taken by a smartphone, the date is almost guaranteed to be correct, since time is automatically kept in check via satellites. Interestingly, discovering location information turned out to be heavily dependant on the level of text included within the image. Of course some images included recognizable geographic or architectural features, but most required an internet search of a street name or business, which could then be verified by cross referencing the image with Google Street View or other images online.


Images with very little contextual information proved to be the most difficult (such as the image below). In this case—as would likely be the case for an archivist—the description was kept to a minimum.


Next step: produce the documents that will house these descriptions.

Posted by Eliot Wright at 1:32 PM No comments:

“…the medium of writing—whose presence in a photo archive was, according to Allan Sekula, a sign of a lack of trust in photography’s mimetic powers—cannot necessarily be trusted any more than the photographs themselves.” Spieker, Sven, “1970–2000, Archive, Database, Photography,” The Big Archive: art from bureaucracy, Boston: MIT Press (2008), 140

To begin the process of applying language to the thirty disparate images I have to work with, I figured it was necessary to learn more about the way in which institutional archives describe photographs. This first led me to a few texts outlining complicated classification rules and taxonomies that should be maintained within archives, such as this manual on Describing Archives: A Content Standard (DACS, for short). Determining rather quickly that it was not my responsibility to understand the complexities of proper archival description, I looked to existing archival descriptions for answers.

Combing through the Library of Congress, the Library and Archives of Canada, the Archives of Ontario and the City of Toronto Archives, I began to see trends in the way archival photographs were described. In a general sense the descriptions are didactic, providing a barebones description of what is the primary subject within the image (of course, in some cases the subject is subjective, and that is where things can get interesting). Location and date are the next details provided, locating the image both temporally and geographically. If there is no location information available, the description will sometimes include [location unknown] or simply be ignored. Dates are commonly included, and when uncertain they seem to be estimated: [1894?] or [1940–45]. In some cases, descriptions are very complex as seen in this example from the Library of Congress below.

In other cases, description may be entirely minimal, as in the following example from the Library and Archives of Canada.


An important point to make here is that the descriptions I am referring to are the top-level image description, sometimes listed as "titles." Opening the record (either online or in the institution) will often reveal further levels of information, including details about the fonds, the author, alternate descriptions and other relevant info. However, I am focusing on the top-level description since it is the first text encountered in the archive and the text that is used to determine whether or not to look at the record. In other words, when searching an archive it is this language that holds the power over the photograph's visibility or its use. This is especially true in many cases where the photograph is only visible after requesting to view it at the institution, a decision that is based solely off of the archival description. Here it is possible to start to understand the power of language in relation to the photographic archive.

Posted by Eliot Wright at 10:59 AM No comments:

Regarding archives, I began to think about how heavily they rely on language. To find and retrieve documents from an archive, you must use keywords and terminology. When searching specifically for photographs, you are often brought to a written description of them, before being able to view the photograph itself. This got me to thinking about some examples of contemporary web "archives," such as Instagram or Flickr, that rely heavily on keywords to link potential viewers with content. Even this blog I am using used "labels"in a similar manner. Another relevant example is cataloguing digital photographs. Virtually every platform—Lightroom, Bridge, Capture One, iPhoto—all allow for the input of keywords to help retrieve images.

With this focus on language and description, I started writing down all the words for things that I could see when I looked at the photos in "archive" provided. Here's an example:
I also decided that it might be fun to try something more slightly more literary:
All of this got me to thinking about how little a photograph can actually tell you. I recall someone saying that a picture actually needs a thousands words, rather than it being worth a thousand words. Of course, this is very problematic when it comes to archives. So, going forward, I think I will work with language and description in relation to these images, as a means of critiqing the notion of the archive.
Posted by Eliot Wright at 12:35 AM No comments: 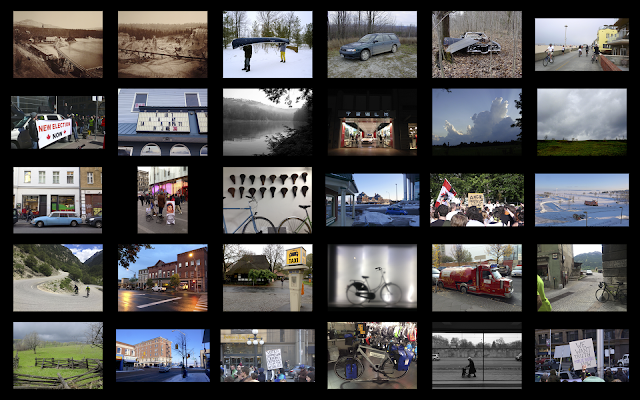 What do you do when you are presented with 30 seemingly arbitrary images and asked to archive them, expanding on the collection with additional images as needed?

My initial response is to group them by categories—forms of transportation, signs, landscapes, etc. However, this quickly leads to overlap, which is to be expected. Categorizing anything is never perfect—images always manage to break the restraints of categorization.

I also feel compelled to trace the lineage of the individual photographs, either through electronic metadata or through formal comparisons. In this sense, I doubt whether I would actually arrive at any truthful conclusions as to who created the images. However, I think there is value in constructing a counter-archival narrative, in which stories about who made the images, where and why, what they depict and how old the are can be attributed. Maybe the images would even leave the electronic realm and (once again) become tangible photographic prints.

For many, the daily commute in Toronto is an unequivocally mundane experience. For subway travelers, often faced with crowded trains and intermittent delays, it is easy to feel automated within the lull of the train car—a simple component of the machine that is the city. Coming from Newfoundland, where there are no subways, streetcars, or even trains, I have a fascination with the railway that is different from those who’ve experienced it their whole life. As I increasingly feel myself slipping into the routine of my Toronto commute, I will use this project as a way to respond to the mundanity of daily life.

Through time-lapse or hyper-lapse photography I will explore my personal experience of the TTC subway system. Content will range from “driver’s” perspectives from the front and rear of the trains, views of passengers, trains arriving and departing from stations, and my movement through the stations and trains themselves. Personally, I feel that time-lapse photography is particularly trendy right now, perhaps even a gimmick: a cheap trick used by amateurs as an aesthetic move to attract attention to their otherwise banal subject matter. However, there is something fascinating about watching life speed by in a way that we cannot naturally experience. In an era of ever-depreciating attention spans, maybe the time-lapse actually holds a key of sorts. Although occasionally mesmerizing, existing examples of subway time-lapse I have seen lack sustaining interest, as they are often presented in one continuous take. Using Adobe After Effects will allow me to rearrange, manipulate and reconstruct the imagery, exploring grids, reflections, looping, layering and typographic overlays. These effects will break the linear pattern of time-lapse and introduce a poetic rhythm. Additionally, audio recordings from the subway and/or music may be added to enhance the final composition.

To capture the images I will use an iPhone. While this may seem unnecessarily low-tech, I’ve made this decision for a few reasons: Firstly, it is a quotidian object. Unlike more professional cameras, the iPhone is non-threatening, inconspicuous and with me at all times. Secondly, in addition to the embedded time-lapse function there are apps such as “Hyperlapse” and “OSnap” that allow for advanced time-lapse creation. Also, I see a conceptual connection between the speed of web-based information exchange possible with a smartphone and the subterranean network of subway tunnels interconnecting the city. Furthermore, working on this project will be a break from my formal photographic practice (which usually involves research and preparation, cumbersome camera equipment, careful consideration of light and the time of day, and travel to remote locations or other cities/towns) and will allow me to explore new media and forms of representation in a relaxed manner.

Content from the development of this project will be uploaded to a blog that is a sidecar of my professional website. Due to the web-connectivity of the iPhone, it is likely that Instagram will also be used as a platform to present visual developments of this project.

In an era where notions of public and private are increasingly deconstructed through increased surveillance and monitoring, I see this project as adding to this conversation (especially since we refer to subway systems as “public transit”). Additionally, due to the project’s web presence, it will also be positioned within the ever-expanding archive of images uploaded to the web, in the end adding to the mundanity of the post-photographic condition.

Posted by Eliot Wright at 12:27 PM No comments: